Wyoming Voted and Nobody Cared

Elections years always prove to be an interesting breed of journalism. This year is no different. 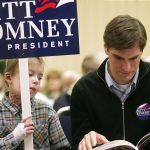 This is why Iowa chooses to go before everyone. Would anyone dare to care about Iowa’s caucus if it was on Super Tuesday (February 5th )? No, according to popular belief, many people would assume that Iowa’s caucus was an Idaho recount. Seriously, how hard is it to get a potato and an ear of corn straight?However, the day everyone is focused on the New Hampshire primary, the media has all but ignored Wyoming. Mitt Romney, however, had better not. This has given him the wonderful spark that he had stolen from him by Mike Huckabee, who Microsoft Word wants to call Mike Chickadee, Checkable, Chickaree, Hoecake, or Mike Huskies. This doesn’t happen in New Mexico.

How great is his name? Unfortunately for name buffs, Wyoming doesn’t think Huckabee is worth even 1% of the delegates they have. Not that the media seems to care. The news crews are so in favor of Huckabee it is hard to see that Wyoming Republicans handedly favored Mitt Romney with 67% of the votes. So, as you are watching the caucuses following Wyoming’s please remember that you need to consult an events calendar once in a while.

Oh, and little states matter too!