According to a TalkLeft posting of July 17 here, Barack Obama raised 52 million dollars in June, compared to only $22 million that Republican candidate for President John McCain raised for the same month. The posting of “Big Tent Democrat” stressed that it’s important for Barack Obama to outraise John McCain since he’s not accepting public financing.

In my own state of Wyoming, my state has voted in the majority for the Republican candidate for President since 1968, a streak which began with helping “Tricky Dick” get into the White House all the way through George W. Bush’s last campaign, according to 270toWin.com Anyway, Barack Obama is leading John McCain by almost $100,000 as of the end of May 2008’s state’s fundraising numbers.

According to figures posted at the Federal Election Commission’s website as of July 17, 2008, in my state of Wyoming, Barack Obama has raised some $241,228 through the end of May 2008. John McCain has raised only $143,906. Even more telling about these figures is that in the “Richie Rich” part of my state, that is the Jackson Hole area in Northwest Wyoming, Barack Obama is leading John McCain through May 2008 $129,046 to $68,981. In the area where I live, the southeastern part of Wyoming, the Democratic candidate for President is leading the Republican candidate for President $40,588 to $6,712. In another concentrated population area of Wyoming, the central part of the state, this is where John McCain has a big lead in money as of the end of May 2008, for he leads with $24,110 to $7,280 for Barack Obama.

Even though tiny Wyoming only has 3 electoral votes, my state could still get some attention by the two candidates, especially if this race stays close nationally. When the Democrats had their primary season, both Hillary Clinton and Barack Obama visited my state, which showed they did value the people here. I got to see Hillary Clinton in Cheyenne, Wyoming this past March. I discuss that in this Associated Content article

Why I Won’t Contribute, Though, To The Candidacy Of Barack Obama 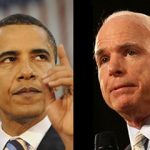 Even though I hope Barack Obama wins the race for the White House over John McCain, I won’t give his campaign a dime. Here’s the reason why: I sent his campaign three emails asking them to help me out with some information, and I didn’t get one response. Why should I give to a campaign any money when I can’t even get an answer to an email? I even took myself off their email list. They didn’t have any trouble sending me emails all the time asking for money, but can’t answer one email of mine. It’s the principle of the thing, you know.

Note: The figures quoted are subject to be updated at the websites.