It’s no surprise that Sen. John McCain is leading in Wyoming. A Mason-Dixon poll conducted in mid August showed the senator leading Sen. Barack Obama by 62 percent to 25 percent. With the state trending heavily Republican as usual, presidential polls in Wyoming suggest that those numbers are not likely to change in the next few months, especially with only 13 percent of the electorate undecided.

The state has a Democratic governor, but its two Senate races and one House race this season have a good chance of being swept by the Republican party, as they historically are. According to the Wyoming Democratic Party, only 62,000 registered Democrats voted in the 2004 general election. Even in a state with only half a million residents, that remains a small percentage, as presidential polls in Wyoming are reflecting. 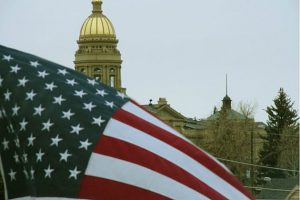 While both Obama and Sen. Hillary Clinton visited the state in March to vie for Wyoming’s 12 delegates to the national convention, presidential polls in Wyoming don’t show them swaying a voting populace with its mind pretty well made up at this stage in the race. In March, however, with attention also from former President Bill Clinton as well as Hillary Clinton, the state buzzed with importance. The Clintons made stops in several cities around the state, including Casper, Laramie and Cheyenne. Obama gave a rousing speech to a crowd of about 10,000 people in the college town of Laramie.

The only traffic since then is in the forms of television ads broadcast on Denver-area stations that are picked up in the southeast part of the state. Presidential polls in Wyoming show that campaigning here is not likely to be the best way for Obama to spend his money.

On the Republican side, the state may see a little attention. A recent television interview by Cheyenne’s NewsChannel 5 of vice presidential candidate Sarah Palin suggested Palin may intend to visit the state this fall. Donna Roofe, a childhood friend of Palin’s, said she had heard from the candidate’s brother that she planned to visit Wyoming. The news comes third-hand, though, and this reporter, with her mind already made up like much of the rest of the state, won’t place too much stock in such rumors.

Presidential polls in Wyoming suggest that Palin will be very favorably received if she does visit the state, though battleground states to the south may need more of her time.

Mason-Dixon, “McCain Lead in most of Intermountain West.”

Click here to read an interesting story about US soldiers. And learn more about starting a polling company.